The first modern mythological thriller book in Gujarati language "Mrityunjaya" will be published in the coming days. The cover page of the thriller "Mrityunjay" book has been designed by Mauli Butch Munshi. India has been known for its literature and language since ancient times. This book which is being made in Gujarati literature will be very popular among the people. Many literature lovers are waiting to read this book. Since the launch of the book cover at Navbharat Sahitya Mandir, 2100 copies of the book have been sold in one week. 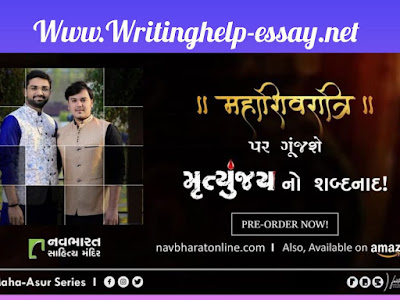 After seeing the cover page of the first part of the Maha-Asura series "Mrityunjaya", literature lovers can buy this thriller book by going to the Navbharat Sahitya Mandir website from now on. (WWW.navbharatonline.com) is the Navbharat Sahitya Mandir website from where you can get this book Can buy. In this great war between religion and irreligion, truth and untruth, nothing is predetermined this time. Navbharat Sahitya Mandir is bringing a thriller book while the creator of the universe Brahma, Nath Mahavishnu of the world as well as the great mythical mystery of the ancient Aryavarta provided by Kalajayi Devadhideva is waiting for the creator of the universe. This book is sponsored by Hari Om Packaging. The creative design of this book is provided by Fortune Designing Studio. The book is managed by Harshit P. Kaur.

Literature is the culture of the country and mythology and fiction is a religion for the people that people worship. The mythological thriller book "Mrityunjaya" will once again introduce us to our myths and the ongoing iniquities and lies in the world. In the same way that our Devadhideva Mahakala destroyed the demonic power, a novel that will introduce people to iniquity and untruth is being presented to the people once again in the present age. This book is a thriller book. The mythological thriller book "Mrityunjaya" which is now considered as a new literature in our culture, mythology and many Indian literature behind the making of this book will soon be published by Navbharat Sahitya Mandir. You can purchase the book from the Navbharat Sahitya Mandir website.