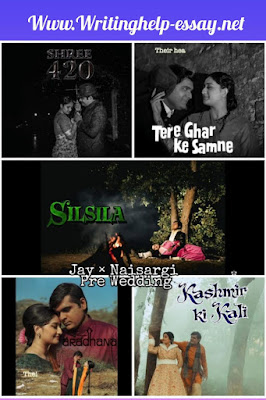 If there is one beautiful pre-wedding in all the pre-weddings so far, it is that of Jay Vyas and his wife Naisargi Vyas from Gujarat who are making a fuss on social media.

We have seen many colorful pre-weddings which show good locations. But the pre-wedding reminiscent of the 60's and 80's has been created by our Gujarati producer Jay Vyas and his wife Naisargi. This video shoot is based on different songs from black and white films. In which he has done his pre-wedding by arranging popular songs of 80's like "Pyaar Hua, Dilka Bhavar Kare Pukar, Isharo Isharo Mein, Gunguna Rahe Bhavre and Neela Asaman So Gaya" again in the same decade. Through which Jay Vyas showed his love for Bollywood music and classic cinema and paid tribute to his favorite actors from Raj Kapoor to Amitabh Bachchan.

The most popular web-series in Gujarati language is just till tea and first of all the producer of the song. Jay Vyas has used black and white theme in his pre-wedding. A different kind of retro pre-wedding has been done by mixing different songs from Bollywood 90s films in one video in the same format. One of his web films "I will meet you" will be seen soon. Jai Vyas, who is making Gujarati songs and web series, has done a pre-wedding shoot for his love in a film style seen in the 80's. You will find this retro pre-wedding on Jay Vyas's YouTube. He also has a YouTube channel Jay Vyas Productions. Gujarat and Gujarati people always celebrate each of their festivals in a different way. Jay Vyas has also come up with a new idea for pre-wedding by shooting his pre-wedding in a different way.